About the Liberal Party

About the Liberal Party

The Liberal Party of Australia was founded on October 16, 1944 after a three-day conference in Canberra. The conference was convened by Robert Menzies, the then leader of the United Australia Party (UAP). 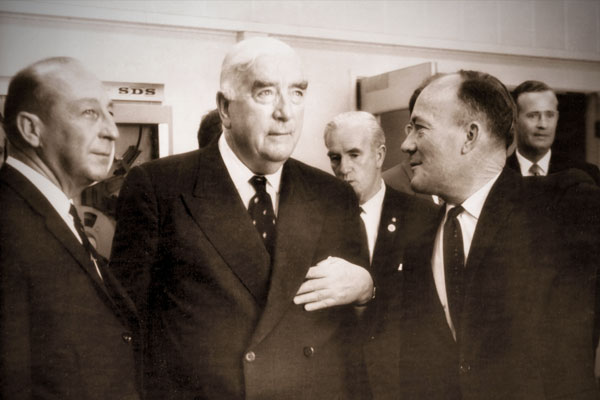 Robert Menzies sensed the need for a united political party that offered Australians an alternative to the Labor Government of the day and its socialist ways. Menzies foresaw a party based on modern liberal political beliefs. He invited 80 delegates to meet in October 1944, a meeting often referred to as "The Canberra Conference". These men and women represented 18 separate political and semi-political organisations, who stood for liberal, progressive policy. They were opposed to socialism, with its bureaucratic administration and restriction of personal freedom.

At the conference, the broad objectives for a new Party were adopted and it was agreed that a Federal Organisation would be established with a branch (now called a division) in each State.

The delegates were unanimous in their support for the name of the party. The Liberal Party would be, in Menzies words, a "progressive party, willing to make experiments, in no sense reactionary but believing in the individual, his rights and his enterprise [sic]."

In December 1944 a second conference was held in Albury. The meeting formalised the structure of the Party, adopted a provisional Federal constitution, and appointed an interim Federal Executive. Five years later, on 10 December 1949, the Liberal Party was elected to govern the country in coalition with the Country Party. Robert Menzies (later Sir Robert) served more than 16 consecutive years as Prime Minister—the longest period to date.

The Liberal-Country Coalition remained in government until 1972 under Prime Ministers Harold Holt (1966-1967), John Gorton (1968-1971) and William McMahon (1971-1972). The Coalition again held office from 1975 to 1983, with Malcolm Fraser as Prime Minister. In 1996 the Liberal-National Coalition achieved a landslide victory under John Howard's leadership. The Coalition had a long and strong period in government until 2007 and regained power in September 2013 when Tony Abbott was elected the 28th Prime Minister of Australia.

The South Australian Liberal Party had its origin in 1891 under the title of the National Defence League. The term 'Liberal' first entered the name in 1906 as the Liberal and Democratic Union. It underwent several name changes until, in 1932, it came to be known as the Liberal and Country League (LCL).

It held office from 1933-38 under Richard Butler then from 1938-65 with Thomas Playford as the Premier. The next term of office was from 1968-70 with Steele Hall as Premier. The next Liberal Government was that of David Tonkin from 1979-82. After a period in opposition, the Liberals were returned in 1993, with Dean Brown as Leader. John Olsen was elected Leader in 1996 and the Liberal Party won a second term of office in October 1997. Following Olsen's subsequent resignation in 2001, Rob Kerin was elected Leader. The Liberal Party then lost office in 2002. Steven Marshall, elected Member for Dunstan (formally Norwood) in 2010, was then elected Leader in 2013. Steven Marshall lead a dedicated and strong team to become a majority government after winning the 2018 State Election, ending Labor's 16 year reign and annihilating third party contester Nick Xenophon's SA Best Party.

Today, the State Liberals remain strong and united under Premier Steven Marshall who was elected to lead a majority government after the 2018 State Election. Steven Marshall leads an energetic team that continues to deliver for the people of South Australia.

With substantial periods in office at national and state levels, the Liberal Party has been Australia's most successful post-war political party.